Have you ever wondered why some people seem to stay young forever, while others look quite old at 33? Is it a freak of nature, an inherited disposition or are there other factors?

How about saying that it is 80% in our own hands?! In the article picture we used a glaring example, Chuando Tan the photographer and model is really impressive, at 57 years old he looks better than many a 25 year old… Sure he has good genes, but if he had been drinking, smoking and eating badly to boot (regular workouts aside), he certainly wouldn’t look like that today!

The whole secret, no matter if man or woman, lies in the free radicals and their effect on our organism. Their presence determines whether we age quickly or slowly. It’s not that you can turn back the clock, but from the age of 25 onwards, it’s up to you whether you look like you’re 50 when you’re 40 or vice versa. Diet and lifestyle habits are decisive.

But let’s deal with the process of cell ageing and how to stop it.

With the emergence of multicellularity and the associated differentiation of cells into germline and somatic cells, an ageing process is associated for the somatic cells, which leads to the death of the cells and the multicellular organism. Germline cells (egg and sperm cells) are potentially immortal, i.e. they can continue to divide indefinitely. Under unfavourable environmental influences, however, these cells also show signs of ageing, which can, however, be eliminated under favourable conditions.

It has been discovered that during electron transport in the respiratory chain, peroxide ions (O2-) can be formed, which form aggressive free radicals via hydrogen peroxide. Radicals are organic or inorganic compounds with one or more unpaired electrons. As they try to capture electrons to have complete pairs again, they are very reactive. These radicals destroy proteins, lipids and DNA. With ageing, their number increases and leads to the restriction of ATP production.
The ageing process described seems to be a consequence of energy deficiency in the organism, in which the mitochondria are involved. It has been found that diseases of the nervous system such as Parkinson’s disease have their cause in insufficient energy production in certain nerve cells.

Studies on human and animal cells have shown that enzymes of aged cells have only 25-50% of their activity. In the experiment with 3-year-old rats (comparable to a 90-year-old human), 30-50 % of all proteins were oxidised and thus damaged. Lipids were also non-functional and even the DNA of the mitochondria and the cell nucleus showed mutations. In the mitochondria, free radicals (atoms, molecules or ions with an unpaired electron) are formed during cellular respiration. They are particularly reactive and attach themselves to many vital substances. Their number increases with age.

The 4 main sources of free radicals:

”Stop the Oxidative Process with Antioxidants“

Antioxidants offer protection against so-called “free radicals”. On the one hand, these free radicals are formed by the body itself during various metabolic processes, on the other hand, they are produced by harmful external influences such as cigarette smoke, environmental toxins or UV radiation from the sun.
If there are too many free radicals in our body, so-called “oxidative stress” develops. This is said to contribute to diseases such as arteriosclerosis, cardiovascular diseases, arthritis and cancer and also causes the skin to age more quickly.
Oxidation can be observed, for example, in cut apples – they turn brown. Anyone who sprinkles lemon juice on apple slices can see that the antioxidant vitamin C prevents this oxidation: they retain their natural colour.
As a rule, our body has a well-functioning protective system to keep free radicals in check. Antioxidants usually do not work in isolation, but in interaction with other antioxidants (antioxidant network). Individual vitamins (B2, vitamin C and E) and minerals (selenium, zinc) are components of this system.

The origin of antioxidants:

Re 2: Antioxidants from food are for example:

The red and yellow plant pigments betalains (betacyans and betaxanthins) are also increasingly discussed. These are contained, for example, in beetroot, yellow beetroot, chard with coloured stems and coloured cactus fruits. However, little is known about their nutritional and physiological effects and their bioavailability.

Important for the menu:
Plenty of plant-based and varied foods!

What is behind the advertising on antioxidants?

Antioxidants neutralise so-called “free radicals” and are thus supposed to contribute to a reduction in the ageing process and risk of disease. However, the studies are not quite so clear. The European Food Safety Authority has reviewed the studies on the protective function of antioxidants and found that the data for many substances is not scientifically sound. Only a few statements on the protection against free radicals (oxidative stress) are admissible. These include the statement for zinc, selenium as well as vitamins C, E and B2 that they help “to protect the cells from oxidative stress”.

The sentence is also allowed: “Olive oil polyphenols help protect blood lipids from oxidative stress”.
It has not been proven that isolated antioxidants in the form of food supplements (or in ACE products with beta-carotene, vitamin C and E) protect against diseases such as arteriosclerosis, heart attacks, strokes, arthritis or cancers, or stop ageing processes in the sense of anti-ageing.

Polyphenol-rich olive oil seems to be the remedy of choice…

… especially if, like our favourite Chuando Tan, you don’t have an abundance of antioxidants to fall back on, like those found on an Asian table. Sport and exercise do the rest, because a fat-heavy body increases the risk of inflammation and thus also the emergence of free radicals. But his example should serve to show everyone else what is possible and what we ourselves can achieve through personal responsibility. 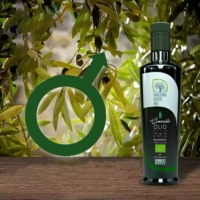